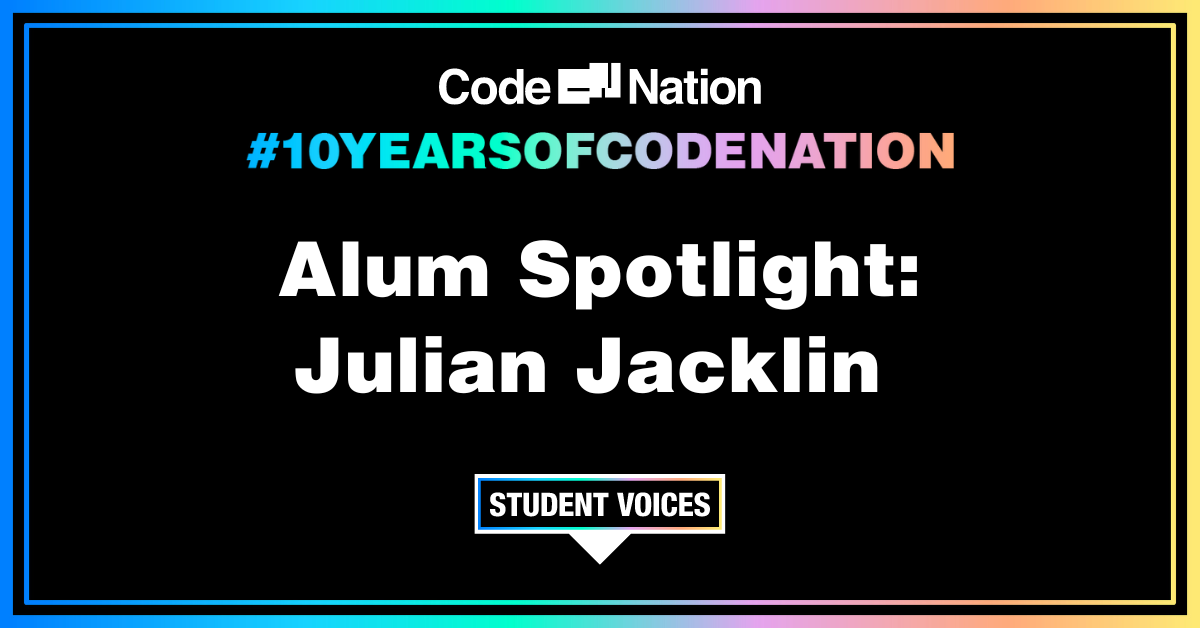 Julian just started his second year at Reed College, a small liberal arts school in Portland. He’s taking a class that he never imagined he’d ever be enrolled in: computer systems, where he’s taking his first dive into hardware and understanding how data works in a physical machine. He’s keeping busy in addition to his classes as an intern at the Admission office and picking up a few shifts at the school’s sports center. As a first generation college student, and one of the first from his high school to apply and get into Reed College, he’s loving his experience in the Admissions office – showing families from marginalized background around the campus and helping students like him navigate the ins and outs of applying to and attending college.

There have been a lot of firsts for Julian. He never thought he’d learn and be interested in squash, a game akin to handball, something he loved doing when he was a high schooler in New York City. And when he started high school, he hadn’t had much exposure to tech or coding.

Julian’s journey to Reed College, and to majoring in Computer Science, started back in 10th grade. Code Nation was a new offering at his school, and he remembers flocking to the paper sign up sheet in the auditorium. The first introductory class was offered every other morning for Julian and a small group of students. “I really enjoyed it. There were plenty of volunteers because it was a small class, so there was always help and support around, and as a first exposure to coding, it was exciting. I also was learning along with my friends, which was really fun. We grew together.”

That same small group of friends then applied to Fellowship I, which was being offered in partnership with Flat Iron Health in New York City. Julian distinctly remembers saying, “I’m going to Code Nation,” when anyone asked what he was doing after school. Julian remembers how valuable that immersive experience in the tech office was, because soon – everything moved to a virtual format during the beginning of the pandemic. “When Fellowship II started online, I was definitely bummed – because I wanted to see the Google offices in Chelsea in person.” But Julian still made the most of the opportunity to directly interact with Google employees, which made an impact on him: he hopes to work at Google after college, specifically in their research division. “Getting exposure to people who actually work there was really cool.”

Julian was well-prepared when he started looking into potential colleges. Through his participation in Fellowship programs, he’d built a portfolio of varied coding and technical projects that he could showcase or point to in interviews and applications. In fact, he remembers a specific project that he worked on for weeks that got more and more advanced because he was working 1:1 with a volunteer. “It became our project! It was my first experience collaborating on a project and working on something larger scale.” Julian’s skills, and his confidence, continued to grow alongside his peers. 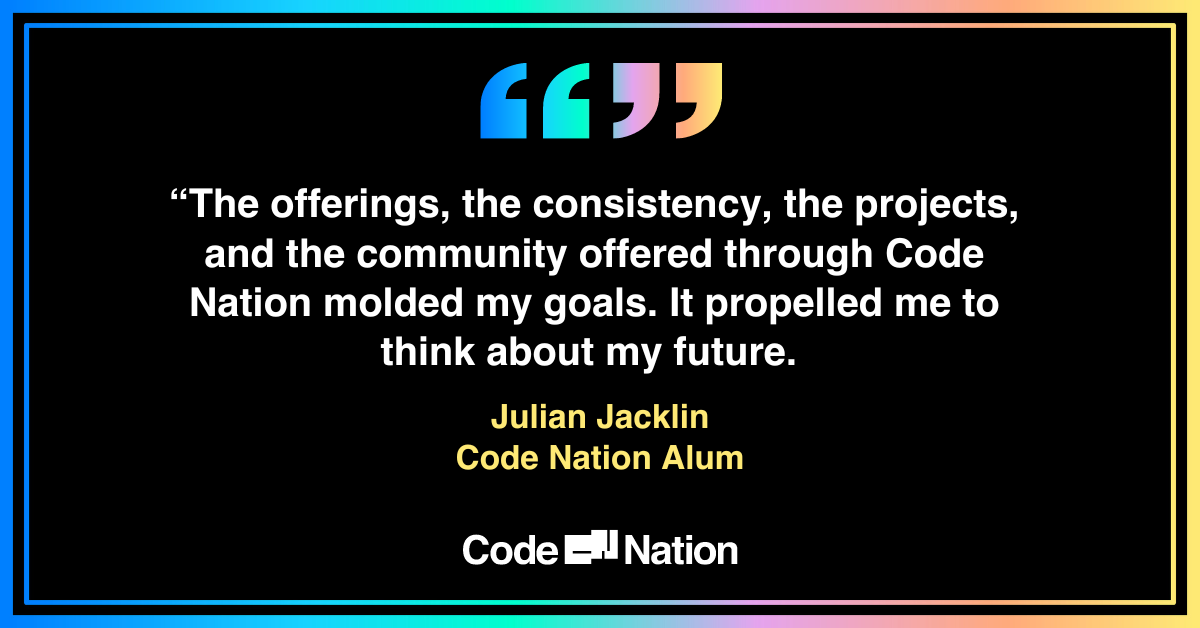 Julian’s participation in Code Nation programs was a major factor in putting him on his current path. “The offerings, the consistency, the projects, and the community offered through Code Nation molded my goals. It propelled me to think about my future. My school was small, so there was a group of 3 or 4 of us that went through all of the classes and Fellowships. We still communicate all the time, and we’re all majoring in some form of computer science in college.” Code Nation allowed Julian to meet people with similar interests – whether it was collaborating on a project or walking back to the train together after a Fellowship, Julian felt like the community offered through Code Nation set it apart.

Julian is also passionate about education, and while he hopes to land a job in technical management, his long term ambitions center around computer science education, and he’s already made a difference in his own community. 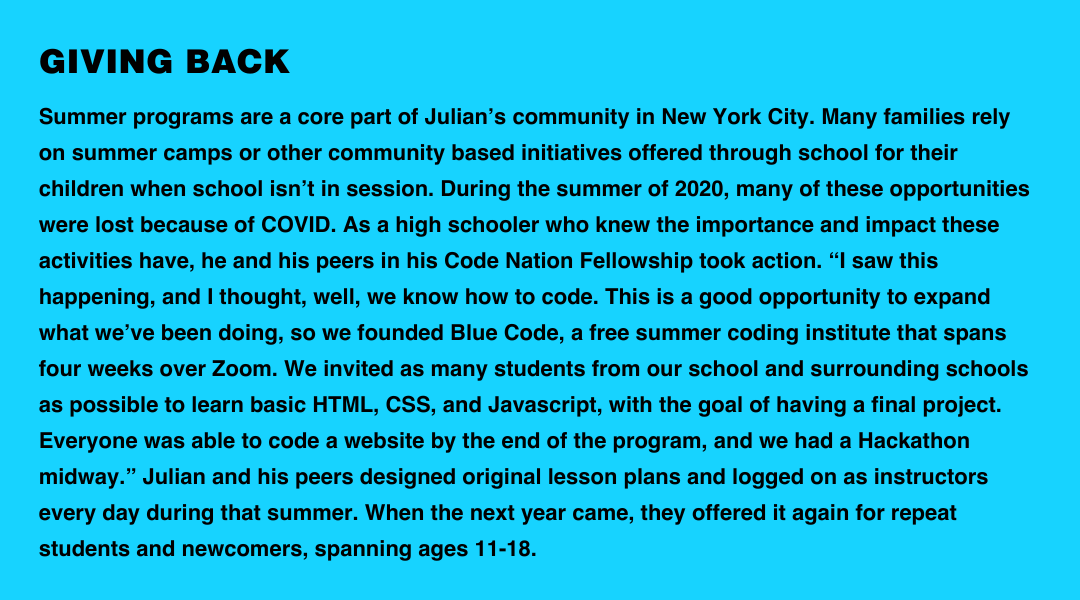 At Reed, Julian is still working on the curriculum he piloted with Blue Code, and worked with the college’s science outreach program to offer an on-campus coding camp. “My journey so far in computer science has been defined by a lot of things, but one consistent thread is taking what I’ve learned, and passing it onto others.”

This post is part of our #10YearsOfCodeNation celebration. We’re sharing the stories of our people: students, alums, volunteers, partners, and the committed staff who bring our vision to life.